How I Fell in Love With Impact Mapping...

12 months ago my team was engaged to provide a very rough estimate for a large new reporting and analytics program.  Over the next 5 months we cycled back and forth until eventually the sponsor decided to proceed and nominated a “business lead” to work with us. Excited by the problem, I quickly reached out and invited the nominee to visit our site, meet the development team and understand the work in progress.  From this meeting we established that the program had a number of senior stakeholders with competing priorities, so I offered to help facilitate a workshop with the stakeholders to clarify the scope and priorities.  The offer was accepted and the workshop was held a few weeks later.

I'm sure you can imagine my surprise when the workshop attendees turned out to be external consultants, rather than the actual senior business stakeholders we had expected.  Surprises aside, the consultants were credible enough proxies for us to feel we were making good progress cobbling together high level scope and priorities.  Good enough, in fact, that we moved roughly the top priority scope items forward into a discovery phase, enabling us to produce a long and expensive plan to deliver about half the scope!

As the proverb says every cloud has a silver lining. Our unappealing plan led to an invitation to present (“explain”) to the senior business stakeholders at the program governance meeting. The presentation sparked a lively conversation about timing, priorities and scope. The program lead, responsible for getting the business case approved and funding released, requested a “deep dive” to understand who had requested each feature and associated benefit. Empathising with him as I recalled harrowingly similar situations in my past life as a business sponsor, I offered to facilitate the “deep dive” he requested.

A couple of months passed before our offer of assistance was accepted. When they did decide to workshop the scope and benefits with us they pulled out all the stops.  With the support of the executive sponsor the session was made mandatory for the program’s senior stakeholders to attend. It might have taken us 9 months, but we finally had the chance to actually connect with our stakeholders and understand the problems they were trying to solve.  Now we just had to live up to the expectation we had created!

As luck would have it my friend and colleague Wayne Palmer had recently read Gojko Adzic's Impact Mapping. He had been talking about it incessantly waiting for the right opportunity to use it. When I told him about the challenge he was quick to find a whiteboard and explain why impact mapping was the answer. I was sold. That weekend I purchased  it on my kindle and read it back to front. I was in love!

With the intention of immersing the business stakeholders in our agile world we turned one of our standard meeting rooms into a collaboration workspace using our "Jean Tabaka meeting" skills. The walls were plastered with butchers paper and the large table made out of several smaller desks was pulled apart to create smaller team spaces. With a JET Spotify playlist energising the room we waited anxiously for our guests to arrive.

The group arrived on mass about 15 minutes late. Introductions and handshakes all round, an apology for the shocking Movember Mos some of the team were sporting  and we were ready to go. I opened with the usual workshop kick off techniques, agreeing the agenda, purpose and operating agreements. Then we dived into an explanation of impact mapping.

According to impactmapping.org: An impact map is a visualisation of scope and underlying assumptions, created collaboratively by senior technical and business people. It is a mind-map grown during a discussion facilitated by answering the following four questions:

With the explanation complete and the group keen to get started, I asked each participant to write down on an index card what they believed the Goal of the program to be. Each person's suggestion was read out to the group and pinned to the meeting room wall. After a quick lesson for our executives on dot voting, we had a proposed goal.  A little further education onJean Tabaka’s definition of consensus (I can live with that and support it) and we have moved from proposed to agreed.

The next input we needed for our map was Actors. I briefly reminded the group of the definition of actors and asked them to brainstorm in their table groups. In hindsight we should have time boxed this exercise rather than letting them write until they ran out of ideas! Thirty something actors later, we had quite a list. Given we were over half way through a 2 hour workshop (that had started 30 minutes late) completing the mind map for all of the actors was not going to happen. So we split them into Primary, Secondary and Off Stage actors, then dote voted to determine which of the Primary actors were most important to the goal.

Four groups roles surfaced as key to delivering on the goal - Finance, Products, the customer facing teams and the line management of the customer facing teams. With 15 minutes left in the workshop and having made a commitment to the group that we would finish on time, Wayne and I felt we needed to at least start on the how for the most important actor, to incentivise the participants to come back for another session. After a quick group brain storm we got a handful of inputs, honoured our time-box, and agreed to call it a day. The highlight of the afternoon definitely came in the last moments when there was a universal commitment to clearing diaries and returning for the second session.

We entered the second workshop determined to draw out measurable impacts from the group. This was a true test of my facilitation skills, not helped by it being the second day of summer and 36°C (97°F)! While I don't think we ever got to measurable impacts we did draw out some recurring themes about "trust and belief" that would become the foundation of our delivery approach.

It was a long afternoon. The session ran over by an hour and the building's air conditioning had automatically turned off. By the time we had captured impacts for the four actors and prioritised them, everyone was very hot and very tired. I remember feeling rather deflated at the end of the session. We hadn't gotten to what and our stakeholders were grumpy. From the debate, it became apparent that this stakeholder group had not had many opportunities in the past to discuss their competing priorities.  Looking back now, I can see that this was probably the most valuable session we had. We had entered what Jean Tabaka had taught us was the "groan zone" (from Sam Kaner's book the Facilitator's Guide to Participatory Decision-Making). 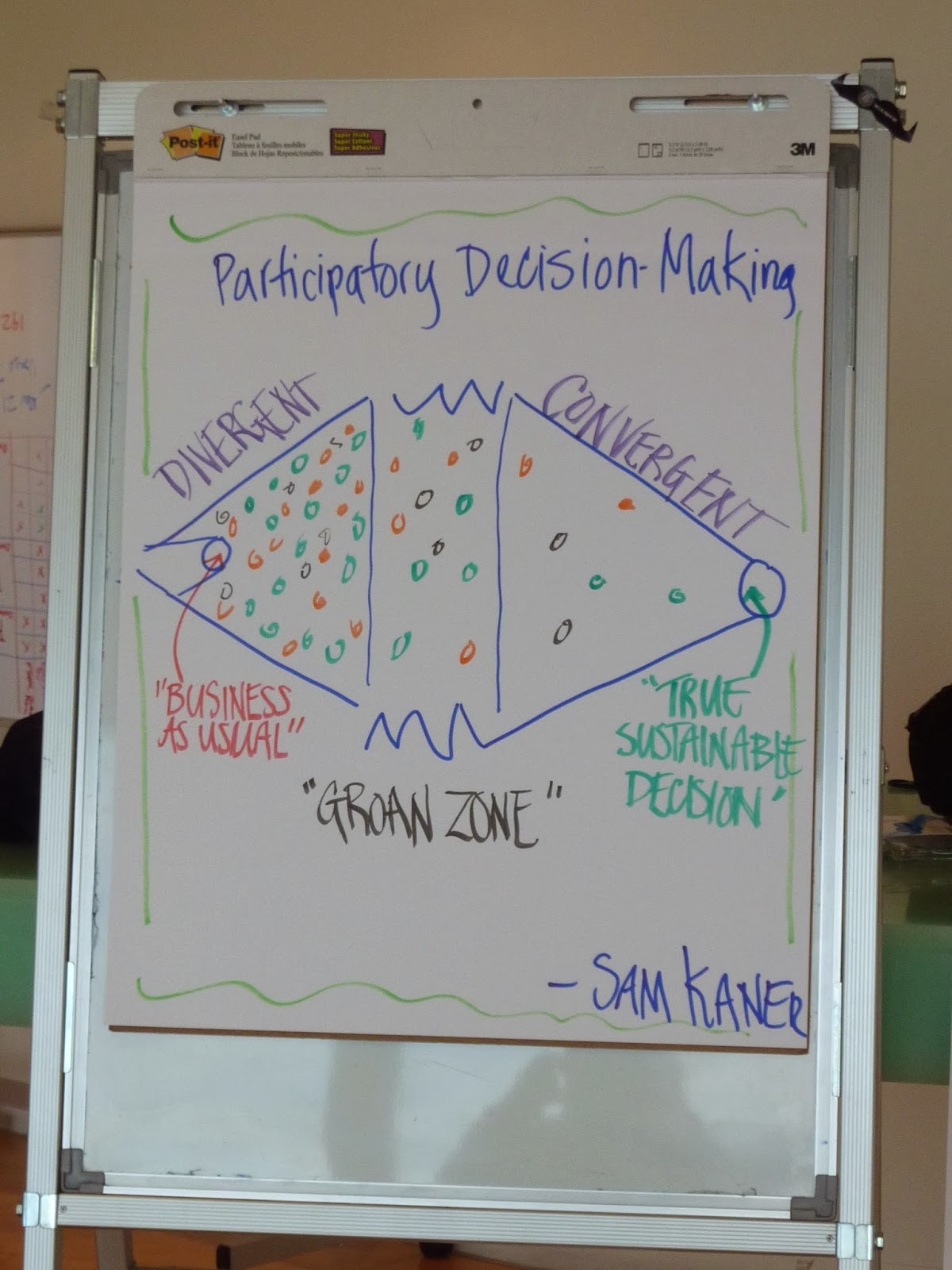 By 7pm, while the group had managed to agree on the top impacts there was no way we were going to make any progress on the what that evening. At least they were open to another session, although this time they requested we meet at their location and come prepared with our view of how the existing shopping list of deliverables map (or don't map) to the priority impacts.

In preparation for the next workshop we put the impact map in MindMup and produced a storyboard for a powerpoint deck! That last workshop had clearly shaken our confidence. We were afraid that we might have lost buy in to the process and for just a moment we thought communicating through slides would be more comfortable for them and help us reconnect. As the plan shaped up and we constructed the impact map from index cards on a large meeting room wall, our confidence began to return and the powerpoint deck was abandoned.

As requested the next workshop was held at head office, so we packed up our index cards and reconstructed the impact map there. It turned out that meeting at a more convenient location for our stakeholders came with the added bonus of less late and less grumpy stakeholders! 🙂

We positioned the purpose of this session being to confirm the scope, ratify the priorities and agree to pivot. The stakeholders were clearly impressed with the impact map visualisation, with one stakeholder commenting "You have captured our problem exactly!" This session ran fairly smoothly. A couple of scope items were added and a few more were clarified and we reached consensus on scope. When we opened the discussion on priorities there were two clear camps. Minus the heat and the later hour, the conversation was constructive although inconclusive. Feeling that a decision was in reach we agreed to facilitate a prioritisation session, this time over laying some indicative timelines to help them understand the trade offs.

For the final session we had narrowed the options down to three alternatives with clear links to the Actors and Impacts they support. This time the discussion focused on clarification of the options with  consensus being reached on option 2 - which much to our delight was the same option that the impact map pointed to! Four circa 90 minute workshops over two months and we had done it! The impact map had captured the essence of the business problem and provided the catalyst for a much needed pivot by the program.

Through the impact mapping workshops, I truly believe we transformed our relationship with this business group. The focus has shifted from delivering against a predefined roadmap, to a prototype driven discovery process able to flex and pivot as we learn more about the problem space. Our business lead has even driven a renewed focus on getting the right business people to take ownership of the newly defined features! As for me, Impact Mapping is now an essential part of my agile toolkit and a concept I have already commenced using with new stakeholders.

To hear the full story you can view my talk from Agile Australia 2015, Impact Mapping - Making an Impact over Shipping Software, on InfoQ.

Tags: Agile, Visualisation, Collaboration, Facilitation, Impact Mapping, Build the Right Thing
< Can You Be SAFe Without PI Planning?
Launching an Agile Release Train While Standing in a Waterfall >